This semester at RPI I’m taking the class “Modern Binary Exploitation”. This post will detail how I reversed and cracked the rpisec_nuke binary. 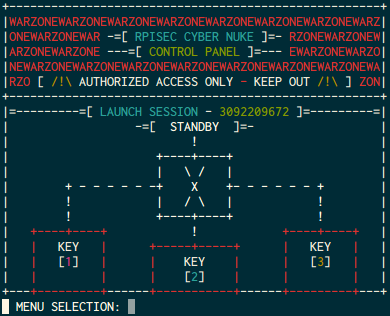 KEY 1 is seemingly the most simple, it asks us for a launch key, and then tries to authenticate with that.

KEY 2 looks more complicated, it askes us for an ‘AES-128 CRYPTO KEY’, a data length, and the data to encrypt. 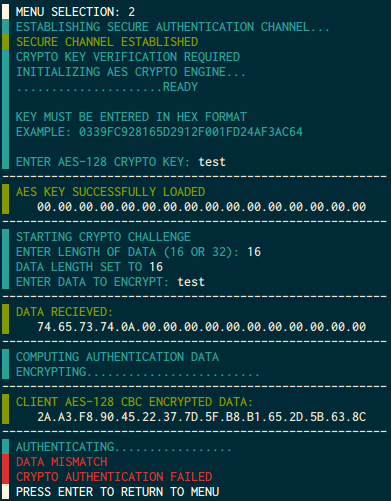 KEY 3 is presumably to be the most complicated. it starts by asking us to confirm the launch session, which is found at the top of the banner, then it gives us a challenge and asks for a response. 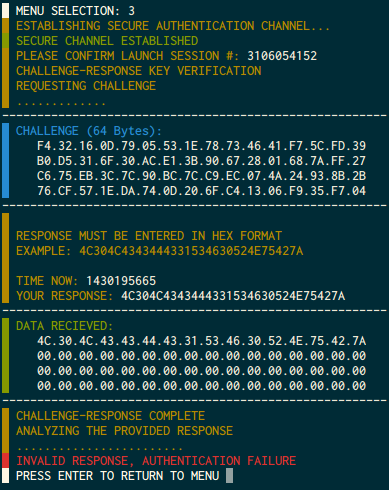 After some time in IDA I found a fantastically simple bug that lets us get through all the authentication steps. If I input null bytes then it stops reading with length 0, with this the strncomp passes since all of the ( zero ) characters were matches.

After spending a bunch of time in IDA looking through two, I couldn’t find the vuln. I gave up and went to key three. The first thing I noticed is that if you fail the launch session on the first time you open three it frees that struct on the WOPR. In GDB I could see that going back into two after this occurance causes it to allocate the struct right on top of where three’s free’d one was. If I enter in garbage on two and then go back to three the challenge that I see will contain the password for two xor’d with random integers.

The first step here was to figure out the prng seed. It was easy to find using IDA that it was seeded with the current time, and since in key three they give us the time of access we can use this as a reference point. If I just enter new lines during key two then when I get the key three, the first line of the challenge after uxoring should be

I wrote a loop to keep trying times lesser than the time output in key three until it was able to unxor to this value. Once I had this I knew the prng seed and could take advantage of any random numbers in the program. I also used this seed to unxor key two which gave me the password in plain text :) Entering this key in unlocks the level.

To unlock the level I simple xor the challenge with the next 16 random numbers and also with the block above. 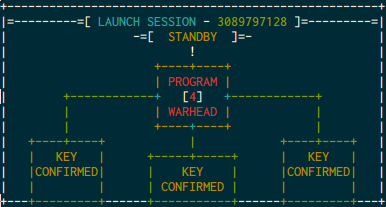 The first thing I see when pressing the almighty 4 is a prompt asking me for the targetting code. After I give my input nuke86 tells me the checksum and then fails. The first thing to do is to figure out how to pass this step. In IDA I see that the checksum is compared against the xor of all three key flags which represent whether or not you have unlocked that key.

Also in the compute_checksum function I see that the checksum is just the composite of my input xor’d 4 bytes at a time. I played around with my input until I was able to get it to match 0xDCDC59A9 This showed me “PROGRAMMING COMPLETE”. When I then type launch it shows me mission failed shutting down, etc. Now it’s time to really learn how to program this thing.

In IDA launch_nuke reveals the “programming language” used by nuke86. Here’s a mapping of the instructions:

With this it’s very easy to write a program to detonate on general doom, just use S and I to write it in, then type DOOM to blow it up 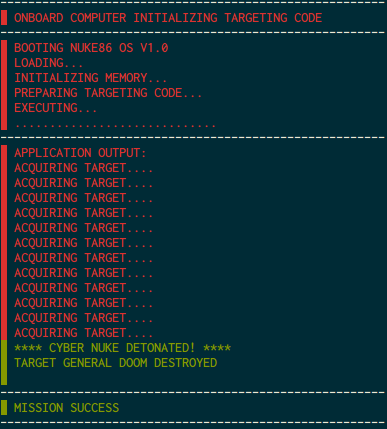 The exploit was pretty trivial to find, if I just keep typing I, then the “program pointer” goes way overboard and gives me write access to the function pointers in the struct namely the detonate_nuke pointer. So I can just I until I’m there, then put in my rop chain and DOOM to detonate. I tested this using strace to see if I can set the real program pointer to 0x41414141 and I was successful.

Since I already have a pointer to the WOPR I can just use that to point to where /bin/sh is input within the nuke86 program, and all I have to do is put in my rop chain after I do all my offsetting with I. I did not actually do the rop chain but I have a high suspicion that it will be the same execve setup that we’ve done many times.

My Auth Program can be found here: auth.py

My Key2 && Key3 inital finders can be found here: keys.py