This semester at RPI I’m taking the class “Modern Binary Exploitation”. This post will detail how I reversed and cracked the tw33tchainz binary.

When we run tw33tchainz the first thing we are presented with is some art and a prompt for our username, and salt. upon entering these values we are given a generated password. 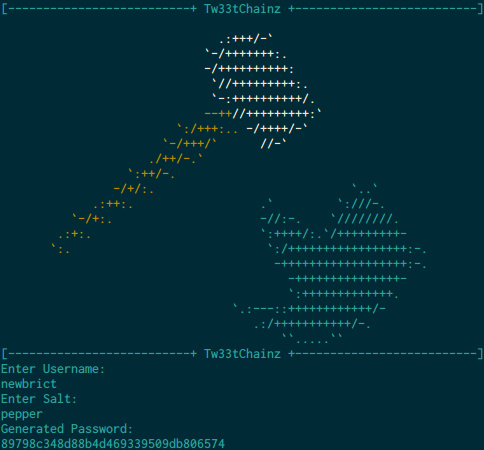 afterwards we are given a menu with 4 options, labelled 1, 2, 4, and 5. the option labelled ‘3’ is missing. Naturally I entered into the prompt 3, then I was asked to enter a password, my guess was incorrect. 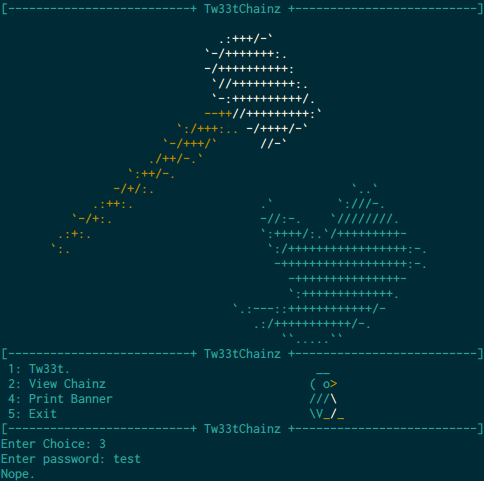 Option 1 lets us enter a tweet which gets stored somewhere, and is appended to the penguin’s beak the next time the menu is output to our term. 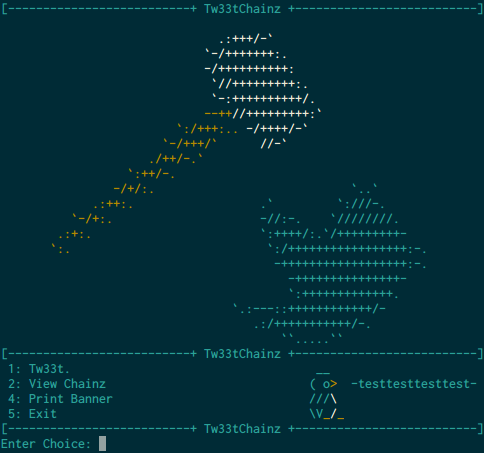 Option 2 lets us view all of our previous tweets.

Option 4 simply prints out the ascii art that’s on top of the menu. ( looks like a mallet smashing a sombrero, or maybe a bird? nah… )

I decided a good first step would be to map out all the functions defined in the binary, I did this through the use of gdb

I then ran the same command for each function in the output.

a quick checksec shows us that RELRO isn’t full, therefore we can overwrite to the GOT.

From here I wanted to see if there were any vulnerable printf statements that would let me make arbitrary memory writes.

I was looking for printfs that touched user input, in the entire program there are only two locations where these reside: print_menu, and view_chainz. I started by going through each printf statement in print_menu and surely enough there is printf which takes the previous tweet and uses it as the first argument, a cardinal sin.

Unfortunately the block of code containing the vulnerable printf looks like this:

the first three lines there check to see if you are admin. If 0x804c0a8 is 0 then you are not admin, if either of the bottom 2 bytes are non-zero then you are considered an admin.

the vulnerable printf cannot be reached unless we’re set to admin. So the next step is to figure out what the correct password for option 3 is.

taking a look at the gen_pass function I see that it simply reads 16 bytes from /dev/urandom, these 16 random bytes are the password required for option 3.

then later down in gen_user it calls print_pass which outputs the generated password as hex.

given this, with a carefully chosen user and salt, we can easily recover the secret pass from the generated pass that we are given.

with these values I know that when we’re adding the secret password to 0xff the value will overflow and be 1 less than the original value.

this means that in our generated password, we simply add 2 to the even bytes, and leave the odd bytes unchanged. except for the last byte, which was null. The last byte remains unchanged from the secret password.

I wrote a python script which takes the generated password as a command line argument and returns the secret password.

Success!, now that we’re admin we have a menu option labelled 6, and more importantly, access to the vulnerable printf statement in print_menu 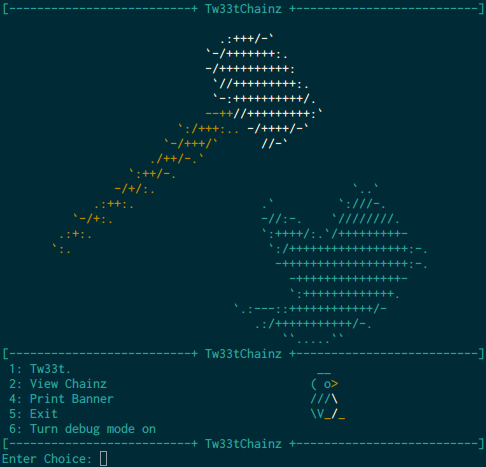 since tweets are limited to 16 characters, the format string for the exploit must be this length.

in gdb I noticed that the stack is actually misalighned by 1 byte so the first character of the format string will be used to realign it.

This means we have 15 bytes remaining for an arbitrary write.

First thing’s first, we need the address to write to, this will consume 4 more bytes which leaves us 11 bytes for %x and %n to actually write the value.

With 11 bytes there is simply not enough room for enough %x tokens to get to the address on the stack, which means I’ll have to use direct parameter access. with all the required characters our tweet format looks like this

…. will be the address

The only thing left is to determine what values to substitute for ???, and which parameter # will be.

looking at the stack I can see that # has to be 8.

when doing some test writes in gdb I can see that whatever value I put in for ??? will be written to memory as 5 higher than the original value which means I just simply subtract 5 from the value I want to write and then the correct value will be written. This works unless the value I want to write is less than 5 since I can’t write a negative number of bytes. To mediate this I simply add 256 to every value which lets it overflow cleanly into the correct value.

The final anatomy of a malicious tweet which writes the value 0x10 to the location 0x43434343 looks like this.

Now it’s just a matter of finding a location to write my shellcode, then writing it, overwriting exit to point to that location ( Thanks RELRO! ) and cat’ing the password :)

and formatted it to be more easily readable by my final script: binsh.hex

I wrote a python script to create the format string given the address to write to, the tweet number, and the value to write: get_tweet.py

and my final driver to input all this to the program, and cat the password is written in bash: driver.sh